Ronald Fraser is the author of three histories of Spain: Blood of Spain, In Hiding and The Pueblo.

Did he or didn’t he?

Having described a significant segment of his past in South from Granada, published in 1957, Gerald Brenan went on to write two volumes of autobiography, A Life of One’s Own (1902) and Personal Record (1974). These covered his life from early childhood to his return to southern Spain in 1953 when he was nearly sixty, with a few final pages devoted to the following twenty years. Shortly before his death in 1987, a selection of the letters between him and his lifelong friend, Ralph Partridge, was also published. It seemed that there was not much more we would want or need to know about the foremost British writer on Spain this century.

The Interior Castle: A Life of Gerald Brenan
by Jonathan Gathorne-Hardy.

Having described a significant segment of his past in South from Granada, published in 1957, Gerald Brenan went on to write two volumes of autobiography, A Life of One’s Own (1902) and

Ralph Glasser’s and Nicholas Gage’s latest autobiographical instalments find their authors making good in their countries of adoption, England and the US respectively. The cost to each of their ascent from exceedingly harsh social beginnings has been different, but in ways that are not surprising: in England the struggle centred on class, in the US on money. Not that class and money are separable in either country, only that their precedence is reversed. Class – learning the codes of Oxbridge language and conduct – opened the gates to Glasser’s professional future, while in the US Gage had first to accumulate the money to get a university education before entering the ranks of the middle classes.’

Gorbals Voices, Siren Songs
by Ralph Glasser.
A Place for Us
by Nicholas Gage.
The Hidden Damage
by James Stern.

Ralph Glasser’s and Nicholas Gage’s latest autobiographical instalments find their authors making good in their countries of adoption, England and the US respectively. The cost to...

In 1973 Ian Gibson published The Death of Lorca, his outstanding investigation into the circumstances, silenced for forty years by the Franco regime, of the poet’s assassination at the insurgent military’s hands in the first month of the Civil War. It is highly fitting, therefore, that Gibson should have now written the life of Lorca, as close to a definitive biography as we are likely to get.

There is a terrible irony here. Had Lorca, in his panic of the days leading up to the Civil War, chosen to go almost anywhere but home to his parents in Granada, where the hatred against him was the greatest – had he stayed in Madrid, as some friends advised, or gone to Mexico, where he was awaited – he would certainly have lived.

From a distance, the image of a pistol-toting Civil Guard colonel holding prisoner Spain’s cabinet and members of parliament recalled Marx’s phrase that history, tragic in its first occurrence, repeats itself as farce. From a lesser distance, the long night of 23-24 February, with tanks in the streets of Valencia, national television taken over, ministers and deputies incarcerated under armed guard in the Cortes, sometimes seemed like history setting out to repeat itself as tragedy.

From a distance, the image of a pistol-toting Civil Guard colonel holding prisoner Spain’s cabinet and members of parliament recalled Marx’s phrase that history, tragic in its first... 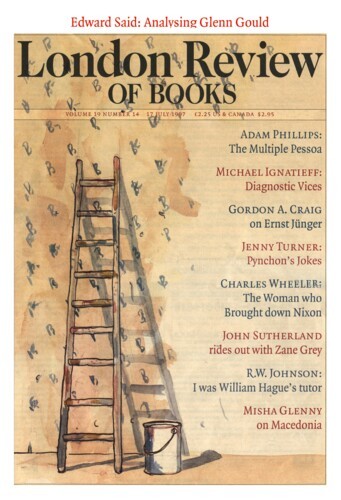 Having read Michael Ignatieff’s review of Hystories: Hysterical Epidemics and Modern Culture (LRB, 17 July), I wouldn’t threaten Professor Showalter with death; or even, as a long-term sufferer, wish Chronic Fatigue Syndrome on her. But to use a hand-me-down theory (i.e. the depressive origins of CFS) to fit a thesis without bothering to check the by now considerable body of international medical...
See moreShow oldest

Pieces about Ronald Fraser in the LRB

The Potter, the Priest and the Stick in the Mud: Spain v. Napoleon

In March 1962, the German far-right intellectual Carl Schmitt visited Spain. It was a homecoming of sorts, for while Germany now shunned this brilliant jurist, who had given enthusiastic support...

When students ruled the earth

Twenty years is a long time in politics. To me, the flavour of the year 1968 is still ‘anti-Fascism’. The meanings of ‘Fascism’ and ‘National Socialism’ are...

These are books by middle-aged semi-Scots who have chosen to publish accounts of their early lives which lay stress on the troubles they experienced, on the troubles inflicted by poverty and...

Read anywhere with the London Review of Books app, available now from the App Store for Apple devices, Google Play for Android devices and Amazon for your Kindle Fire.

For highlights from the latest issue, our archive and the blog, as well as news, events and exclusive promotions.

This site requires the use of Javascript to provide the best possible experience. Please change your browser settings to allow Javascript content to run.