Michael Schmidt is Editor of PN Review. His last book of poems was A Change of Affairs.

I had a savage dream of destinations: A ten-foot fence, barbed, and on the wire Bones and the rags of prisoners. I had This dream, and woke in the cool English air.

I learn the dead wear shoes. Their beards cast a last shadow. Kissing your face, I’m troubled by the roughness As when you came to tuck me up, Brushed my cheek with yours And tip-toed out.

I had a savage dream of destinations: A ten-foot fence, barbed, and on the wire Bones and the rags of prisoners. I had This dream, and woke in the cool English air. 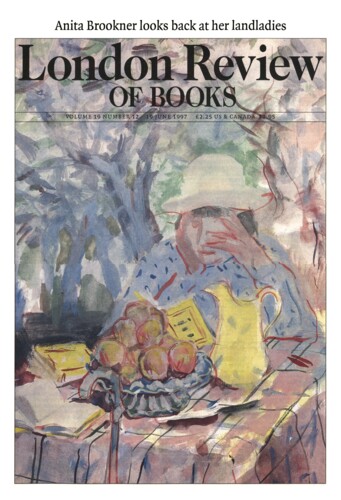 Pieces about Michael Schmidt in the LRB

Dithyrambs for Athens: The difficulties of reading Pindar

The Theban poet Pindar (c.520-446 BC), though he wrote much else, is principally known for his magnificent odes, known as epinicians, in praise of athletic victories by aristocrats and tyrants,...

Yalden, Hammond, Stepney, Fenton (Elijah) and Hughes (John): where are you now? Ten of the 52 poets represented in Samuel Johnson’s Lives of the Poets fail to make an appearance in the

Penelope Fitzgerald’s Innocence is set in Florence, the principal characters are Italian, and I kept asking myself: how is it done? She knows quite a lot about Italian society: but more...

We shall not be moved

There remains a most decided difference – indeed it grows wider every year – between what Philip Larkin calls ‘being a writer’, or ‘being a poet’, and managing...

I don’t find that my children want to hear what things were like when I was young. Publishers, who are sometimes also parents, must find that their families don’t want to listen to...

What became of Modernism?

What became of the Modernist movement? It was initiated by Pound and Eliot about the time of the First World War, and in America it set off a further wave of innovation (often referred to as...

Read anywhere with the London Review of Books app, available now from the App Store for Apple devices, Google Play for Android devices and Amazon for your Kindle Fire.

For highlights from the latest issue, our archive and the blog, as well as news, events and exclusive promotions.

This site requires the use of Javascript to provide the best possible experience. Please change your browser settings to allow Javascript content to run.